Welcome to my blog! You can find out more about me and the blog on the about page. Drop by the contact page if you’d like to contact me for anything!

I’m sure everyone is familiar with the constant struggle of wondering what kind of food to eat for dinner. Well, this dish was born on a night that I couldn’t quite decide between meal prepping a Thai dish or enchiladas. My indecisiveness paved the way for a recipe featuring red chile chicken enchiladas with a Thai twist. And, just to make the dish even more special, the enchiladas are wrapped with zucchini rather than tortillas. 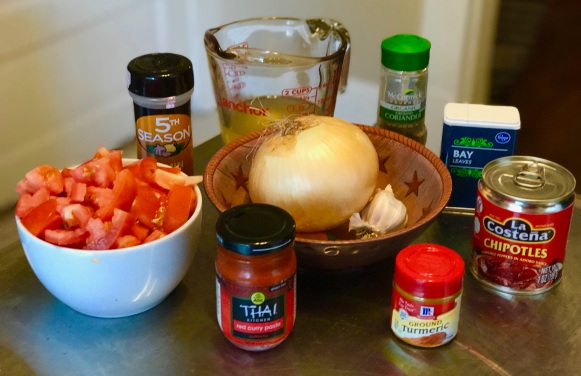 The flavor profile from this dish derives from ingredients classically found in TexMex cuisine as well as ingredients central to many Thai dishes. The cumin and chipotle peppers give the enchilada sauce a classic TexMex kick while the red curry paste adds a nice and subtle Thai twist to the expected flavor. If I was meal prepping my typical red chile enchiladas, I would have used a couple of jalapeños to add spice to the dish. These enchiladas, however, are not your typical enchiladas. In order to kick this dish up a notch I decided to use one of my favorite peppers, the Thai Bird’s Eye Chili Pepper. Keep reading in order to learn more about these peppers and this dish, or scroll on down to the bottom of the page for the recipe. 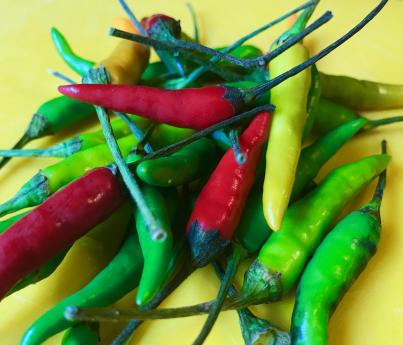 Thai Bird’s Eye Chilies are small, attractive peppers frequently used in Southeast Asian cuisine. These peppers may be small, but they have quite the spicy kick to them, putting them among the ranks of the habanero pepper.

The Thai Bird’s Eye Chili belongs to the Capsicum genus, a family of fruits known for their capsaicin content. Fun fact, the origins of the Capsicum genus can be traced back to the pre-Columbian Americas, specifically Mexico. So this dish kind of pays homage to the origin of the chili. The spread of these peppers to Southeast Asia may be attributed to the Columbian Exchange.

Let’s backtrack a little bit to the topic of capsaicin. What is it? Well, the spice you taste when you bite into a chili pepper is mainly due to capsaicin and other molecules known as capsaicinoids, molecules which bind to a receptor known as TRPV1 in order to elicit the well known burning sensation associated with chili peppers. Now, I’m not trying to dive into biochemistry on this blog, but the TRPV1 receptor’s function in the life cycle of Capsicum flowers is pretty interesting. The seeds of plants from the Capsicum genus are spread mainly by birds. It turns out, avian TRPV1 receptors don’t bind capsaicinoids.

Alright, so back to the enchiladas. In order to make the sauce and cook the chicken, I whipped out my insta pot. This thing works wonders. All it took to prepare the sauce and chicken was prepping some ingredients and placing them all into the pressure cooker. 15 minutes later I had an extremely delicious homemade sauce with incredibly moist shredded chicken.

After I removed the chicken from the pot to shred it, I simply blended the contents of the pot together to create the sauce. In addition to the shredded chicken, I quickly sautéed some shredded carrots, bean sprouts, and sliced green onion to add to the chicken for filling in order to maintain the continuity of Thai inspiration for this dish.

Next came the fun part! Rolling the enchiladas with zucchini! In order to create the zucchini “tortillas,” I used a vegetable peeler to create sheets of zucchini.

Then, I layered three zucchini sheets to make a tortilla and scooped on some filling.

Lastly, I rolled up the enchiladas and placed them in a baking dish! Note: it helps to splash some sauce onto the bottom of the baking dish and place the rolled enchiladas seal-side down. The sauce almost acts like a glue to keep it stable and shut!

Happy meal prepping to all, and to all a good bite!

This recipe made 14 enchiladas, which I divided into 7 meals. Feel free to eat more than 2 enchiladas in one meal if you want! I ate this meal for dinners and lunches and I aim to feel satisfied after I eat, but not stuffed. 3 p.m. food comas are a thing of the past.

Before beginning this meal prep, as with any meal prep, I needed an ice cold drink in my hand. For those of you living under a boulder, the newest Game of Thrones season started last week. In honor of this sacred event, I made Wildfire cocktails. I dyed vodka green and soda yellow and mixed! If you slowly pour the vodka into the drink you can accomplish a gradient effect that mimics the appearance of Wildfire well.

After pouring out a couple of cocktails, I turned my bluetooth speaker up to max volume, started my playlist “Merry 45,” and started cooking. You can click this link to open up the playlist!

For the side dishes with this meal prep, I made TexMex Cauliflower Rice (recipe here) and canned refried black beans.

***Special shoutout again to Uncle Steve for being a total bro and helping me out with cooking this meal and taking pictures!